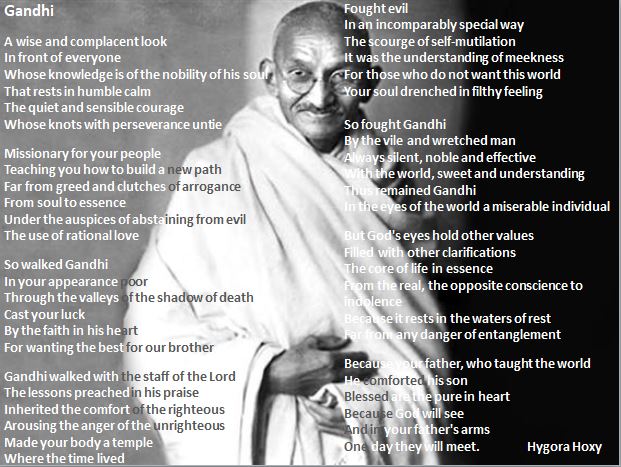 Poem dedicated to the exceptional Mahatma Gandhi. Born and raised in a Hindu family off the coast of Gujarat, western India, and a law graduate from Inner Temple, London, Gandhi first employed nonviolent civil disobedience as an expatriate lawyer in South Africa in the struggle of the indigenous community. for civil rights. Upon his return to India in 1915, he began organizing peasants, farmers, and urban workers to protest against the land tax and excessive discrimination. Taking over the leadership of the Indian National Congress in 1921, Gandhi led national campaigns for various social causes and to achieve Swaraj or self-government.

Original composition in Portuguese-Brazil language “Gandhi”, tradition and edition English. Format edited in the Spanish, Portuguese-Brazil and English language, on the author's page Facebook. Due to lack of time the poems are no longer being versioned or rhymed, literal translation is being used. All rights reserved.